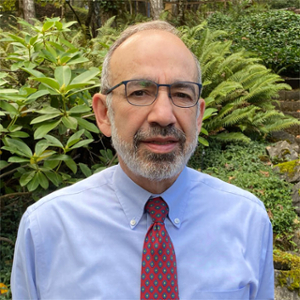 Javier Rojo received a BS in mathematics from UT El Paso, an MS in statistics from Stanford University, and a Ph.D. in statistics from Berkeley under the direction of Erich L. Lehmann. He joined the Epidemiology and Biostatistics Department in the School of Public Health at Indiana University in September of 2021 as a Dean's Eminent Scholar. Prior to joining IU, he was the Korvis Professor of Statistics at Oregon State University. Prior to that, he was the Seneca C. and Mary B. Weeks endowed Chair of Statistics and Chair of Mathematics and Statistics at the University of Nevada at Reno where, as chair, he led the successful efforts to create two new Ph.D. programs. From 2001-2013 he was Professor of Statistics at Rice University where he created the AMS award winning REU RUSIS. From 1984 - 1990 he was assistant professor, associate professor (1990 - 1995), and professor (1995 - 2000) of statistics at UTEP where he founded the BioStatistical Laboratory. He has served on several National Academy of Sciences and Institute of Medicine committees. He is an adjunct professor at the MD Anderson Cancer Center and the Civil Engineering Department at Rice. He has held positions at Sandia Labs Albuquerque, The Rand Corporation Santa Monica, Pacific Gas and Electric San Francisco, and El Paso Natural Gas Co.

Dr. Rojo's unique and effective efforts in diversifying the Mathematical Sciences through the organization of the Lehmann Symposia and Pan-American Advanced Studies Institutes, and most prominently through the REU RUSIS have been recognized by various organizations. The AMS recognized RUSIS in 2014 as a "Program that makes a difference", and in 2018 he received the Etta Z. Falconer award "In recognition of your outstanding contributions to diversifying the landscape of the mathematical and statistical sciences through excellence, mentorship and leadership". In 2020, he was honored with the SACNAS Distinguished Scientist Award for "significant contributions to his field and his long-standing commitment to diversity and inclusion in STEM." Of the forty-two RUSIS alumni who have obtained Ph.D. degrees, 21 are from URM groups and 18 are female. Out of the 257 RUSIS participants, 59% have been URM students.

Javier Rojo, Daniel Vallejo Rodriguez, and Arturo Bronson (1991). "The Effect of the Scratch Shape on the Ohmic Potential Created during Scribing of Electrodes", Journal of the Electrochemical Society, Vol. 138, No 5, 1364-1368.

Javier Rojo and Francisco Samaniego (1993). "On Estimating a Survival Curve Subject to a Uniform Stochastic Ordering Constraint", Journal of the American Statistical Association, Vol. 88, No 422, 566-572.

Javier Rojo (1996). "On the Classification of Probability Distributions by Tail Behavior", Journal of The American Statistical Association, Vol 91, No. 433, 378-384.

Javier Rojo (1996).- "Relationships Between Pure Tail Orderings of Lifetime Distributions and Some Concepts of Residual Life", Annals of Institute of Statist. Math., Vol 48, No. 2, 247-255.